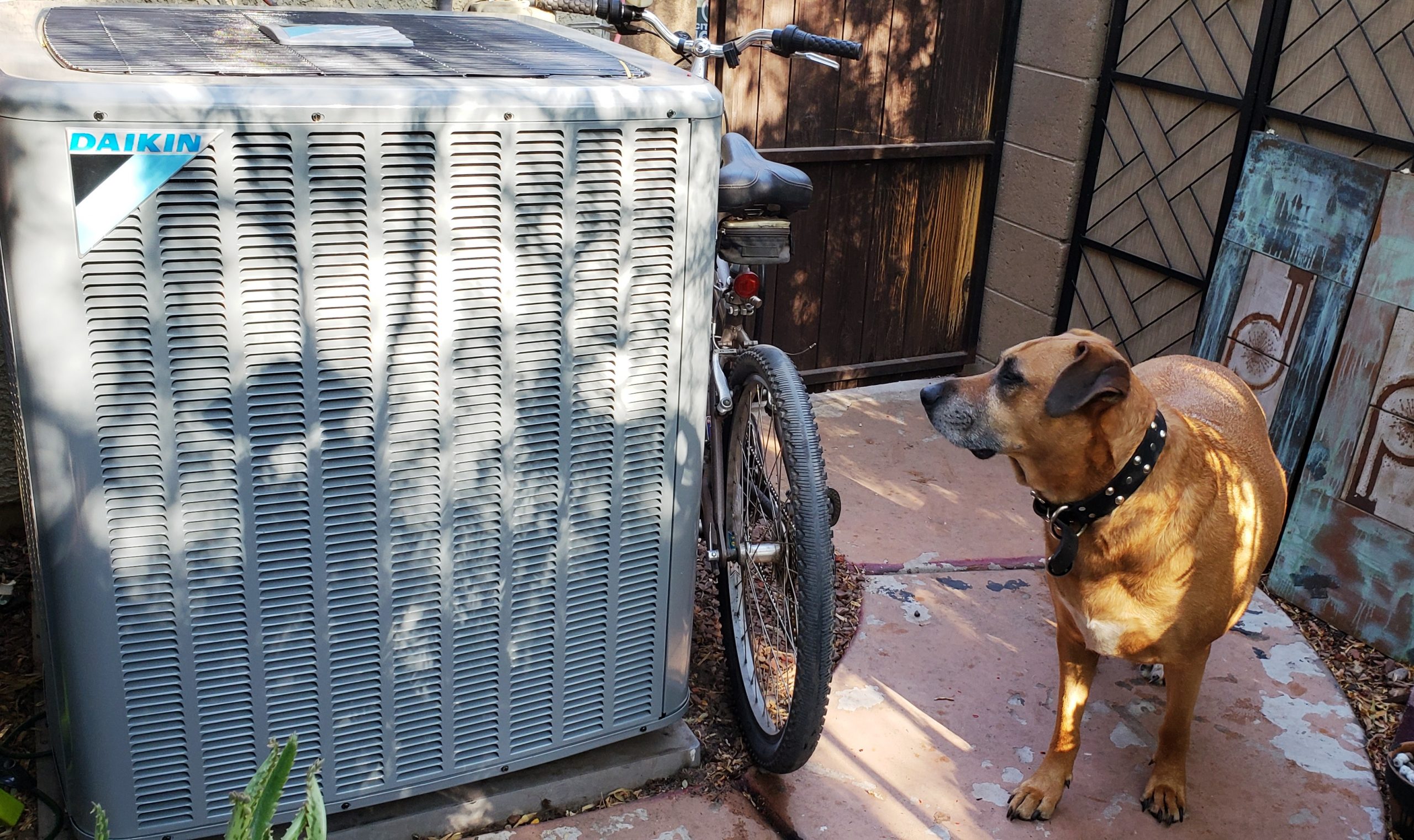 It’s official. This summer marks the year of air conditioning deaths. A pal posted on Facebook that hers had died. A neighbor had an old one hauled away on a flatbed. Mine was close to death, not expected to last through to fall, so I avoided a sudden and violent death by having it replaced this week.

Summers can be brutal in Tucson if you’re stuck without an air conditioner. But that’s not one the thrilling facts I’m about to expose. That one is just common sense.

The thrilling facts are a bit more intriguing, coming from the experienced pros at D&H Air Conditioning Company.  I was graced with several visits where the D&H AC guys first checked in on my old unit and then turned me on to and installed a new one. All were knowledgeable, personable and served up exceptional explanations, along with these three fascinating AC facts.

Globs and globs of dog hair. That’s the main thing that came out of our old outdoor AC unit. The globs and globs came from years and years of long-haired dogs, coupled with the fact that no one ever actually opened and cleaned out the unit for the past decade.

Now, we all already know that dogs are smart. The AC man made them even smarter still by noting he sees globs of dog hair all the time.

“Dogs learn to rub on the unit,” he said, noting that the force sucking in the outside air pulls wayward hair and debris off their coats. It’s like their own personal grooming system.

Since my current two dogs flee in terror from the room if you even sneeze, I cannot imagine them actually going near a loud, vibrating box – much less rubbing on it – but I liked the idea of putting a little fence or barrier around the unit. Not because it would ensure the dogs don’t get close enough for a massage, but for aesthetic reasons. A metal dragon cut-out privacy screen thing is nicer to look at than an AC unit, no?

Stolen Freon is a Hot Market

Yep, air conditioning Freon has a thriving black market, with thousands of dollars’ worth swiped from unsuspecting homeowners every year. On older AC units, all a Freon thief has to do is open a valve on the Freon AC hose, empty the stuff into whatever vessel works for Freon stealing, and then sell it to other people who don’t feel like paying full price for non-stolen Freon.

The AC man said they’ve seen entire neighborhoods hit, with sneaky thieves simply shimmying from house to house in the middle of the night. Homeowners wake up to a non-working AC unit – and a big bill for Freon replacement.

New units come with a special key that locks the Freon valve, and only authorized AC companies are allowed to have the key.

Many AC Units Still Use Technology from 1908

In its early days, air conditioning cooled the interior by coming on full blast, 100-percent power, filling the room with cold air, and then shutting off. It would then wait until the room heated up and repeat the process again and again. That type of system is known as the single-stage system. It’s also what made my old AC unit end up with charred black panel where the starter thing had to start it up full force every time it went on.

Newer AC unit feature a two-step system, which works to maintain an even temperature more like a refrigerator. The system’s first stage hits 60 percent power, filling a room with cold air. It then reduces the load to about 15 to 20 percent power to maintain a steady coolness throughout the interior. Instead of going on and off at 100 percent like a madman, it keeps a slower and more steady pace.

Our AC “comfort advisor” (love the title!) gave us a spot-on analogy. He said the single-stage system was like being a red light and then flooring the gas pedal to speed up and stop at the next red light. A two-stage system was like smoothly accelerating and gently reaching the desired speed, providing far less wear and tear on the car.

Even though I drive like a single-stage system, I went for the two-stage for the new AC unit.

While getting a new AC unit may not be as exciting as getting a new car or killer suede boots, the experience can still be fun. Not only do you get a quieter, more efficient way to cool your home, but your dogs get a brand-new personal grooming system.

Make your cool home even cooler with art from the rynski shop on etsy.