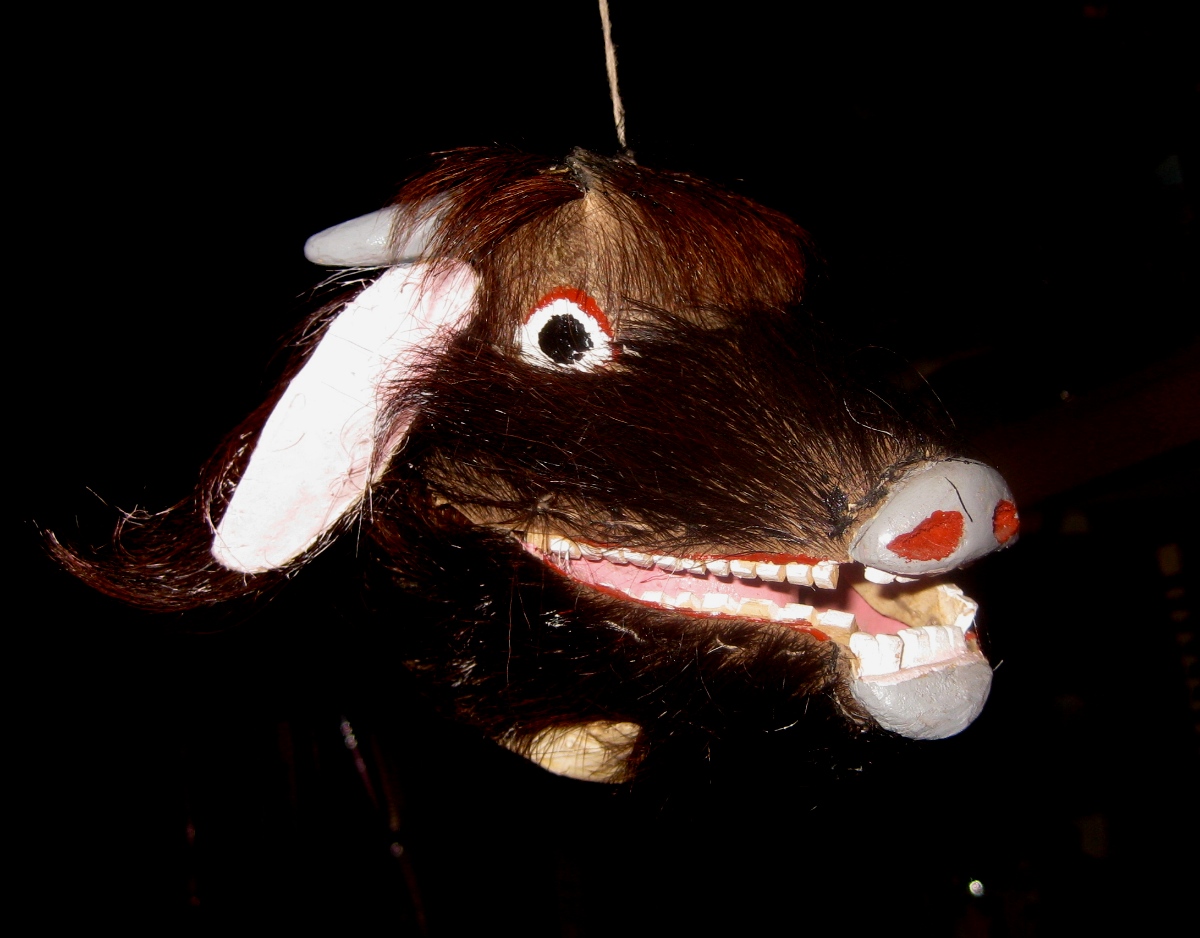 When bad luck repeatedly slams you in the stomach, don’t helplessly double over and moan – simply burn an evil cow head.

At least that’s the bad luck remedy that worked for me and my guy after we invited an evil cow head into my home. Actually, the cow head mask was more than invited into my home; it was dangling gleeful in the center of my house from a light fixture above my kitchen table.

This was no ordinary cow head. It was instead a miniature mask fashioned out of animal hide and hair by the Pascua Yaqui and sold by a vendor at the entrance of our favorite Tucson restaurant.

The cow head caught my eye since it was creepy, freaky and downright ugly – a perfect match for my existing home décor. The vendor gave us a brief rundown of the head, saying it was an evil mask worn by Chapayeka, dancers who join the soldiers in killing off Christ in the tribe’s annual Easter Ceremony.

I was too busy ogling the ugliness of the mottled head to pay the explanation much mind. My beau did ask a vital question, although he asked it too late. The credit card was already in the vendor’s hand.

“Oh, no, no – the Chapayeka won’t bring evil into your home,” the vendor assured us.

Without going into all the gory details, suffice it to say bad luck began to spring up immediately. It started out slowly but soon upped its pace to a rapid clip, taking its cue from the Morton Salt motto.

Things broke, jobs disintegrated, a virus took my computer hostage and my favorite uncle died suddenly and inexplicably at the age of 56. I chalked up the bad luck to karma or fate or being mean to a nerdy kid back in first grade. I also tried to push it out of my mind, but instead suffered a weekend emotional breakdown.

“It’s that stupid cow head,” said my beau. This is the same guy who usually scoffs at my superstitious house rules, such as no new shoes on the table and no hats on the bed. At least my explanation that negative energy seeps up from the toilet was enough to convince him to start putting the seat down.

Burning a dinky dried-out mask might seem like an easy task. But this was pure evil we were dealing with. The process took at least one hour, 1.5 bottles of charcoal fluid, six newspapers, and nine bunches of scrap paper and junk mail to finally reduce the 6-inch cow head to ash.

The head’s wooden strip of teeth took the longest to burn as they grinned ghoulishly in between the flames. My yard smelled of scorched animal hair for a week.

It took less than a week, however, before our luck did a complete 180.

Further research revealed the dancers themselves are freaked out about wearing the evil masks, fearful the wickedness will sneak into their hearts, according to an excerpt from Muriel Thayer Painter’s book “Yaqui Easter.”

For further protection, the Chapayeka performers often keep a rosary cross in their teeth and silently recite prayers while they are wearing the masks. They make the sign of the cross when they are putting them on.

Doesn’t sound like the best thing to have dangling in your kitchen.

The creepy Chapayeka mask could probably wreak more vile havoc than leaving the toilet seat up – but don’t let my beau in on that one.

What’s your take on superstitions?

Have you ever been plagued by a bad luck charm?