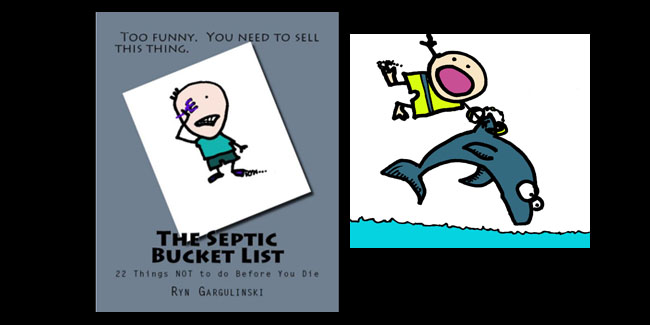 The Septic Bucket List is a newly released illustrated humor book by Ryn Gargulinski (aka yours truly). Instead of a list of oh-so-happy things to do before you die, The Septic Bucket list outlines a list of things you definitely want to avoid.

And rebelling against popular culture isn’t the only reason this book needs to be on your bookshelf or coffee table.

So I put it on my bucket list, where it sat for about a year or so.

Then finally moved forward once I was really, really sick of seeing the project on my list.

The Septic Bucket List lets you set up a quick road to success, doubling as a surefire way to boost self-esteem, enhance health and safety, and kick off all kinds of hilarious conversations when you’re in a room full of people with nothing to say.

Order now! (before you accidentally decide to try one of the must-avoid activities).