The Four Agreements: What Happens when They Go Wrong (Part 2) 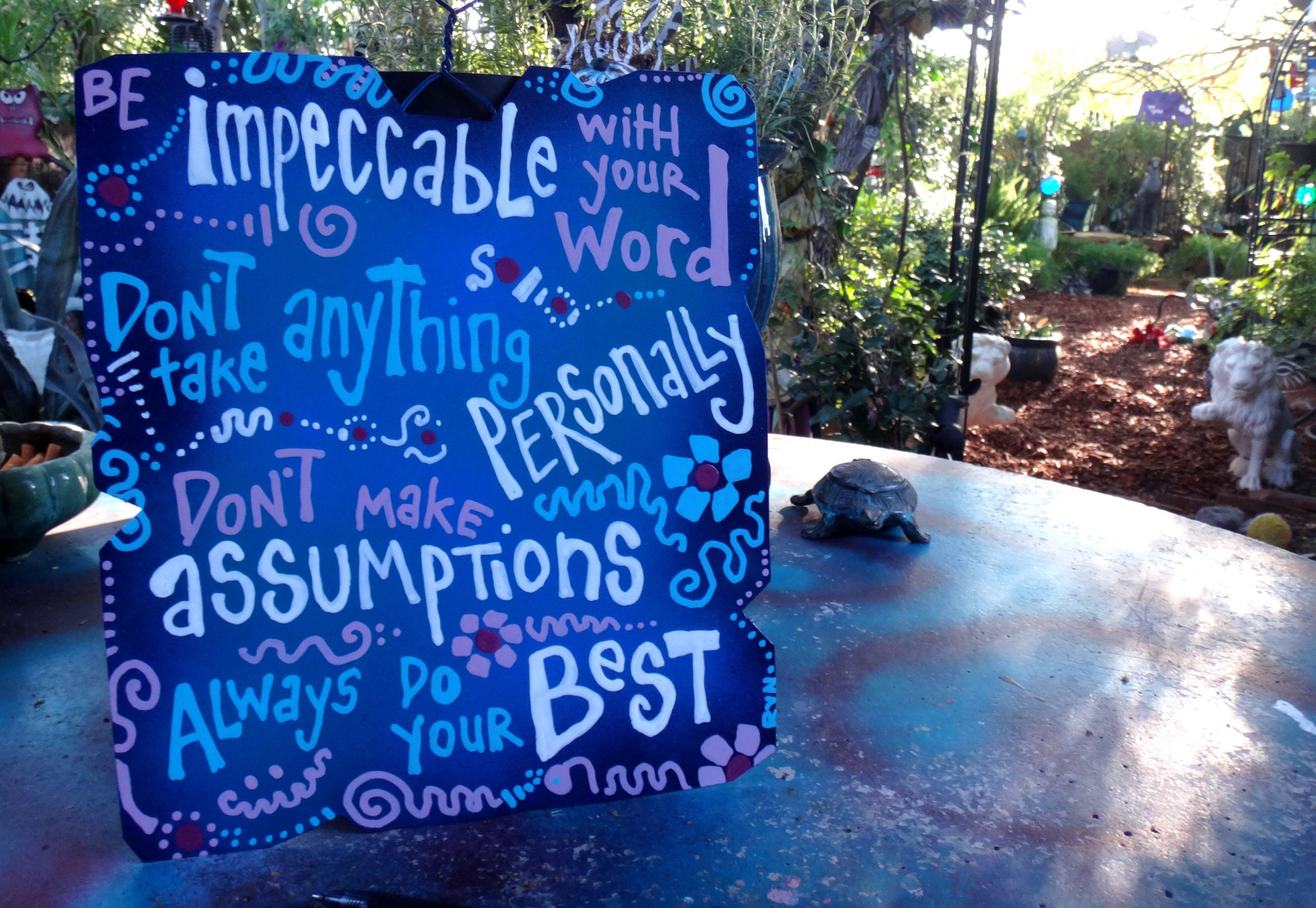 There is no law that makes people follow the four agreements. There doesn’t need to be. The personal anguish we feel when we decide to ignore these dandy guidelines for living is typically penalty enough.

As a refresher, The Four Agreements are outlined in a book by Don Miguel Ruiz. And those agreements are:

We already looked at what happens when the first two agreement go wrong in a previous post. Now it’s time to tackle the second set. Ready? Yeah, we know. Making assumptions makes an ASS of U and Me. But some of us do it anyway. And although the pithy little phrase is amusing, the outcome is usually not. An assumption is filling in the blanks, or making up a truth when we’re not sure what the actual truth may be.

Making assumptions is along the same lines as having expectations. When we assume or expect something will go a certain way, and then it doesn’t, we end up annoyed, enraged, or downright devastated. One of my favorite sayings reminds us: Expectations are resentments waiting to happen.

An organization asked if I’d like to cover and event to write up a story for their publication. Heck yes, said I, assuming the daylong assignment would give me a hefty day’s pay. The event was, after all, three hours long, involved a three-hour round-trip drive, involved taking tons of notes and spending another three hours writing up an article in all its detailed glory.

Nine hours of work should bring in a pretty good check, thought I, something like $500 with gas money and other travel expenses. Man, I could even cut back on other work for the rest of the week, perhaps take an extra day off or buy a new pair of boots!

I submitted the article with glee. They sent me a check for $100.

The work was done and the pay was non-negotiable. Had I asked about the final rate, instead of assuming it was what I wanted it to be, the story would have had an entirely different outcome. For starters, I wouldn’t have accepted the gig to write it. Fourth Agreement: Always Do Your Best

Although this agreement may look pretty simple at a glance, it can actually be one of the tougher ones. That’s because it’s easy to make excuses to skip it.

We can pretend any of our half-baked efforts are the best we can do at any given time, even when we know in our souls that’s not true. We also tend to rush through things we find menial or annoying just to get them done.

Doing a crummy job on any task is going to leave you feeling crummy yourself. Trust me. Whether you’re performing brain surgery or washing a fork, always doing your best will always be worth it. This reminds me of another spot-on saying: How you do anything is how you do everything.

Alas, the example of the fourth agreement gone wrong contains yet another work incident. You’d think all I do is sit around and work.

In any event, this situation arose in a past job where I was tasked with putting labels and stamps on Christmas cards to send out to the hundred or so clients.

“What crap,” I thought, “a waste of my skills. A blind monkey could do this.” I then grumbled along, slapping a label here, pasting a stamp there, and dribbling coffee here, there and everywhere in my haste to finish this seemingly crappy task as quickly as possible.

When I was done, the pile of cards looked horrible. The blind monkey who could have done the task could have certainly done it better.

Labels and stamps were all crooked and smudged. Envelope corners were bent and speckled with coffee. This outcome was not my best. It was probably one of my worst. My boss wasn’t happy. I felt rotten, mainly because my haughty attitude and actions ended up disappointing one of the best bosses I ever did have.

Even though the task appeared to be a rather minor one, it needed to be done precisely as it reflected on the entire image of the company sending the cards. Yes, many of the cards needed to be redone, although I truly did my best the second time around.

Following the four agreements cannot only save you time and heartache, but it can likewise help ensure you don’t drive 300 miles for measly pay, disappoint your favorite boss, or end up losing your job to a blind monkey who can do your work better than you do.