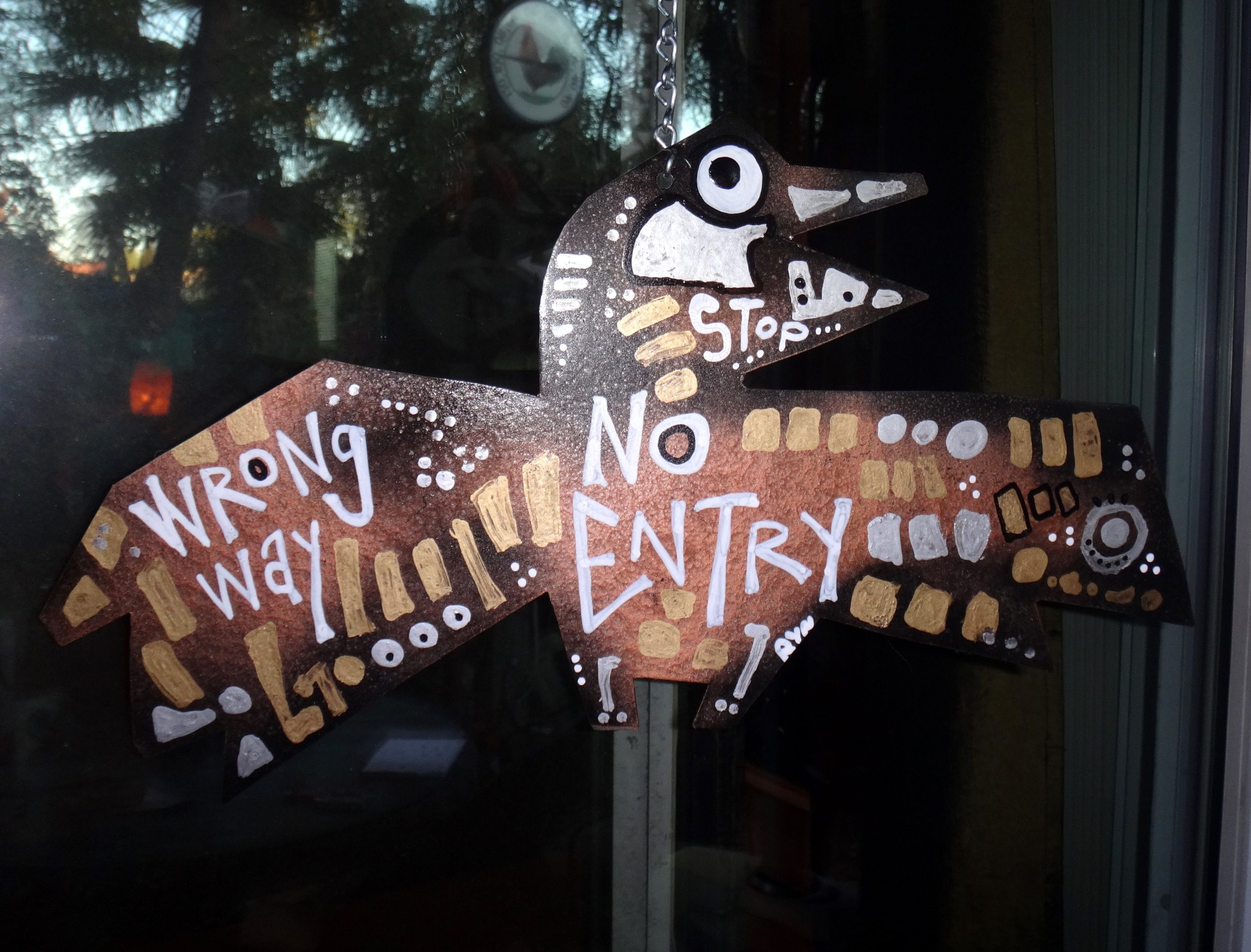 Whether you live in a New York City high rise or a Tucson one-story house, birds always seem to find a way to hurl themselves at whatever windows you may have. Not only does the bird strike’s sickening “thump” tend to interrupt whatever you’re doing, but it also startles the dogs and often leaves a dead, injured or completely stunned bird lying on the ground.

And even birds that are merely stunned can quickly end up injured or dead once the dogs head out to investigate what made the sickening thump.

I recently saved a colorful tanager from certain death after he crashed into our Tucson door wall and then sat at the base of it having what looked like panic attack. He was panting like a freight engine. His eyes were the size of saucers. And his beak was frozen open in an ongoing grimace.

He was so out of it he let me pick gently pick him up and place him on the patio table, away from the certain death from dogs zone. There he sat panting for at least an hour, pooping at least once, until he finally gathered his wits back enough to hop onto a nearby oleander branch.

I vowed I would do whatever I could to make sure this would not happen again. So I checked out some options to prevent bird strikes into windows. Here’s what I found:

While this could work if you live in a climate that doesn’t rain, snow, dip below 72 degrees, or have insects, removing the windows is not a feasible option in most cases. Besides, you’d still have gaping openings in your walls what would beckon birds to fly on in. If you think a tanager pooping once on a patio table is bad, you should see what the average bird can do to your living room carpet.

Exterior shades could cover the window glass, as could meaty chunks of plywood or flat, black paint. But do you really want to sit around in the dark all day?

I ended up ordering two different decal sets, a cool-looking mandala and a circle-spiral-ey thing.

One issue I was already expecting to encounter was longevity. Other window decals have peeled, faded and otherwise fallen prey to window washing, constant sun and other elements and ailments to which exterior windows are regularly exposed.

The other issue was the wait. The cool spiral-ey set was coming all the way from Germany and would take at least 10 days to arrive. After witnessing the panic of the tanager, I knew I couldn’t wait a single second to put something in place. So I moved on to the next solution.

The end result was a bird crash prevention sign that has been a huge hit – not in the literal sense but in the sense of working wonderfully.

As noted in the bird crash prevention sign Etsy description:

Only one bird came close to crashing into the window since I installed the sign about two weeks back. He was heading for the glass at high speed, but then slowed down enough when he saw the sign to change course and only make a “tap” noise instead of a “SPLAT.”

I KNEW birds could read English. Not a bird crash, bird bash or bird strike since!

Thus I’d definitely vote for a unique sign that lasts for years, can be moved to different windows, cities or time zones as needed, and ensures birds get the message that you love them and want to keep them safe.

Get creative and make your own double-sided bird crash prevention sign – or buy one from ryndustries. Either way, the birds will thank you.