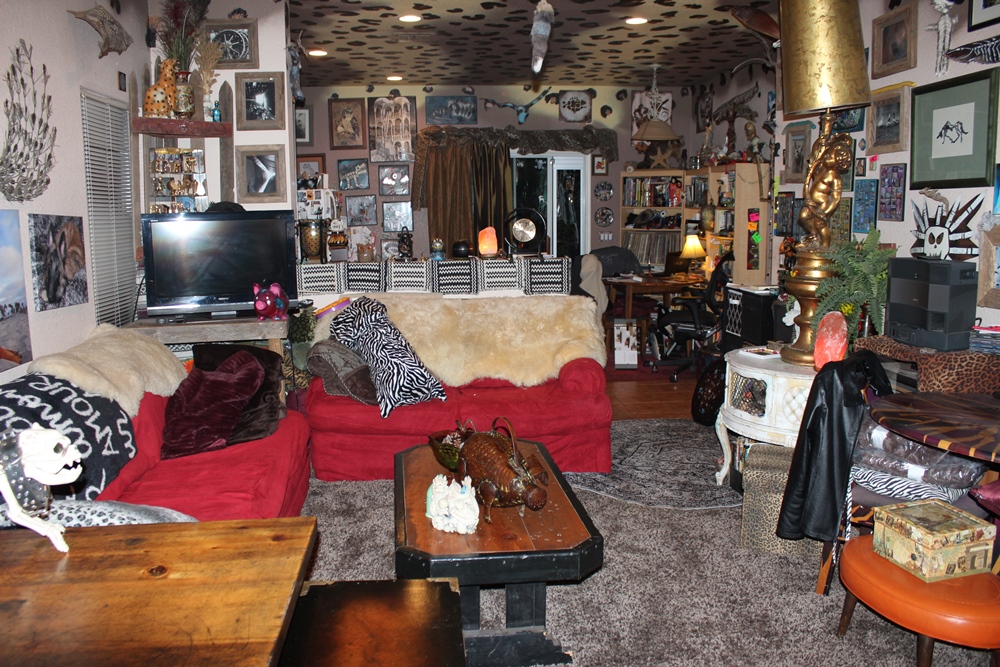 It all started with the carpet. After living with the exact same home décor for the past seven years, I suddenly realized the living room carpet sucked. I had been in denial for the longest time about my area rug choice, which was a combination of two vintage orange shags and one black and white zebra stripe.

The orange shag was authentically from the 1970s, or perhaps even the 60s, given to me back in Tucumcari, New Mexico, from the people at the radio station. I had paid a visit to interview one of them for the newspaper where I worked.

“Love! the carpet,” I had exclaimed.

Station folks explained it was only temporary. It had come from someone’s basement after they had to pull up their existing carpet due to a flood. Once they get the new carpet, would I like the orange shag?

The orange shag then followed me around from New Mexico to Northern California, Southern Oregon to Tucson, Arizona. The nostalgia and color that matches absolutely nothing blinded me to the sorry shape the rugs were actually in.

And the black and white zebra stripe?

That one was probably the worst investment I ever made. Not because it was ugly. It wasn’t. Or at least it wasn’t when I first got it. It got really ugly, really quick when I realized muddy-pawed dogs and white carpet of any sort never, ever mix.

Once I replaced the old living room area rugs with a giant, plush, mushroom-colored shag and a little orientaly round thing, the domino effect was on.

See what happens when you wake up one day and notice the carpet sucks?

The Internet is absolutely amazing for snagging all kinds of tips and tricks that make home improvements creatively affordable. You’ll find credit where it’s due when I ran across helpful hints, along with other tips I picked up on my own.

The mushroom shag is a huge greyish-brownish rug I found on Amazon. It’s as plush and lovely as it appears. And it doesn’t show muddy dog prints! Buying carpet online can be tricky, especially when you happen to notice the shipping dates for some sites are pegged at six months (with rugs coming from somewhere mysterious in China). Read the reviews. Know synthetic blends are less expensive than wool AND are better for cleaning and resisting stains.

Oh yeah, and make sure you have at least one person to help you drag/move/rearrange the furniture while unfurling your huge new rug. Moving the furniture around counts as a weight-lifting session for the week, by the way.

The little, round orientaly rug you really can’t see in the photo came from Overstock, another good choice for rugs that don’t take six months to ship. I was originally going to paint the bathroom counter instead of replacing it to keep costs lower. But the specialized paint that supposedly stuck to counters was $80 for the kit. I instead found a whole new counter and sink for $180 at Home Depot. Real granite, too. New faucet was $90.

This is especially fabulous since once we removed the old counter and sink, we found it was chintzy yellowish laminate glued to plywood. We also realized the sink looked like it was from 1862.

Don’t buy cheap toilet seats. They’re way too loud. Pay the extra bucks to get one of the soft-close, whisper-quiet seats. They rock. I had one before but it was boring old white, and I wrecked it trying to paint it green. The paint never properly stuck. The new one is a whisper-quiet, sleek, shiny black. OK, so I went a little nuts in the bathroom with the paint. Painted the light fixture (not the bulbs). Painted the toilet paper holder. Painted around the mirror. Even painted the inside of the medicine cabinet. It made me laugh every time I opened it for at least a week.

A tremendous “Thank You!” goes to YoungHouseLove for the idea to transform ugly, cheap gold doorknobs into really cool handles with a bit of deglosser and spray paint.

This project was probably the easiest and most fun of the whole batch. Until it came time to put the doorknobs back on, of course. Why do they make those little screw holes so small and annoying?

Painting the kitchen cabinets was the scariest of the projects. Probably because you’re in big trouble if you mess it up. No matter how crappy the orangey cabinets that come with a lot of houses are, you could certainly make them look worse. And a new set of kitchen cabinets ain’t cheap.

I went out on a limb after reading up on the project on multiple websites. Even memorized the steps:

When I got to Home Depot with some last minute questions, however, the paint lady said I didn’t have to sand cabinets if I used this really cool primer. Take hours of the project? You bet! The non-sanding primer was nearly as fascinating as the doorknob deglosser.

I was going to add a Home Depot link to the magical primer, but it’s apparently not available on their site? Perhaps the magical primer and the paint lady were in one of those parallel universe things, with the lady appearing only to sell it to me and then disappear. She had been gone when I went back about 20 minutes later….

Anyway, the brand was Valspar. And this one is the closest I could find to what I got.

While the home improvement project pretty much ate all my spare time for the entire month of January, it was absolutely worth it. Not counting the time involved, the cost of supplies and new furnishings was under $1,500. Not bad for updating seven years worth of old stuff.

The hassle? Not as great as the reward. The only time I was about to give up hope was with my final project of the kitchen bookcase. I tried using some shabby-chic painting technique to make it look distressed. But it instead looked like I pulled it out of a paint store’s back room. It was bad. Very bad. And had to be redone.

While I could certainly continue to domino effect even after the bookcase, especially if I peer too closely at those shabby looking baseboards, there comes a time you need to draw the line. If you don’t, you’ll be living among strewn supplies and the smell of paint forever. And even the dogs know that’s no fun.